The Most Magnificent Thing by Ashley Spires

The third picture book nominated for this year's Morning Calm Medal is The Most Magnificent Thing written by Ashley Spires. 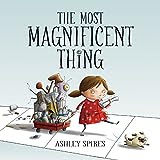 "Award-winning author and illustrator Ashley Spires has created a charming picture book about an unnamed girl and her very best friend, who happens to be a dog. The girl has a wonderful idea. "She is going to make the most MAGNIFICENT thing! She knows just how it will look. She knows just how it will work. All she has to do is make it, and she makes things all the time. Easy-peasy!" But making her magnificent thing is anything but easy, and the girl tries and fails, repeatedly. Eventually, the girl gets really, really mad. She is so mad, in fact, that she quits. But after her dog convinces her to take a walk, she comes back to her project with renewed enthusiasm and manages to get it just right." - Amazon Review

Here is a book trailer advertising this new book:

Biography from Kids Can Press
"Ashley Spires grew up in a little town on the coast of B.C. called Tsawwassen with two parents, an older sister, eight cats, a dog and the occasional newt.
For a while she thought that animation was her future, but then photography caught her eye, which led her to bookmaking courses. These classes opened her eyes to the world of illustration and she never looked back. Delighted that there was, in fact, a career that allowed her to remain in her pajamas, hang out with her cats and be productive at the same time, illustration is the perfect job for her.
Ashley spent time living in Toronto and Saskatoon before returning to her home turf of Delta, BC where she now resides with three cats, a dog and her extremely patient fella.
Like Binky, Ashley does not take kindly to insects, though she rarely eats them. She has ingested a number of bugs accidentally during her frequent jogs and bike rides, but trust me, she didn't enjoy it."

You can visit her website at www.ashleyspires.com
For cool hands-on activities and building ideas,
check out this science buddy blog.