Winnie: the true story of the bear who inspired Winnie-the-Pooh

A.A. Milne wrote the Winnie-the-Pooh stories but from where did he get the original idea? 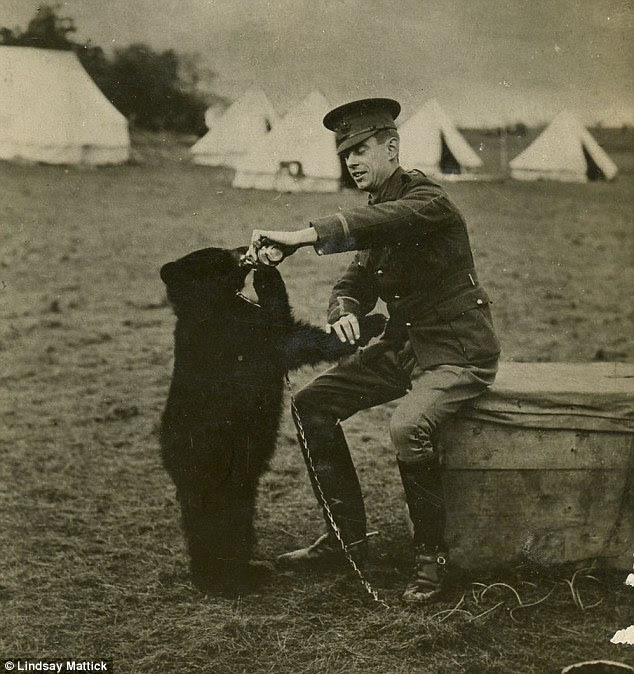 The second picture book being considered for the Morning Calm Medal this year is
Sally Walker's Winnie: the True Story of the Bear who Inspired Winnie-the-Pooh!

"Who could care for a bear? When Harry Colebourn saw a baby bear for sale at the train station, he knew he could care for it. Harry was a veterinarian. But he was also a soldier in training for World War I. Harry named the bear Winnie, short for Winnipeg, his company’s home town, and he brought her along to the training camp in England. Winnie followed Harry everywhere and slept under his cot every night. Before long, she became the regiment’s much-loved mascot. But who could care for the bear when Harry had to go to the battleground in France? Harry found just the right place for Winnie while he was away — the London Zoo. There a little boy named Christopher Robin came along and played with Winnie — he could care for this bear too!"   - Good Reads Review

"Parents often ask what they can give a child who wants to be a writer.   The first thing is a library card.  Paper and pens are another.  But time is the most valuable gift that anyone can give to a budding writer.  Time to wander, time to learn, time to read, and above all, time to dream."

To learn more about the history of Winnie the Pooh, you can go to this website or watch the following short videos.

Posted by Unknown at 5:24 AM No comments:

"Red is not afraid of the big bad wolf. She’s not afraid of anything . . . except magic.
But when Red’s granny falls ill, it seems that only magic can save her, and fearless Red is forced to confront her one weakness.

With the help of a blond, porridge-sampling nuisance called Goldie, Red goes on a quest to cure Granny. Her journey takes her through dwarves’ caverns to a haunted well and a beast’s castle. All the while, Red and Goldie are followed by a wolf and a huntsman—two mortal enemies who seek the girls’ help to defeat each other. And one of them just might have the magical solution Red is looking for."
- Amazon Review

Posted by Unknown at 2:54 AM No comments:

A Hero's Guide to... by Chris Healy

Have you started reading Chris Healy's series
A Hero's Guide to...?

Prince Liam. Prince Frederic. Prince Duncan. Prince Gustav. You’ve never heard of them, have you? These are the princes who saved Sleeping Beauty, Cinderella, Snow White, and Rapunzel, respectively, and yet, thanks to those lousy bards who wrote the tales, you likely know them only as Prince Charming. But all of this is about to change.

Rejected by their princesses and cast out of their castles, the princes stumble upon an evil plot that could endanger each of their kingdoms. Now it’s up to them to triumph over their various shortcomings, take on trolls, bandits, dragons, witches, and other assorted terrors, and become the heroes no one ever thought they could be.


You can have fun exploring the series' website at http://www.officialherosguide.com/